Skip to content
NEED A QUICK ESCAPE FROM OUR WEBSITE? This button will quickly take you to a blank Google search page!
Leave here now
Leave here now
Menu 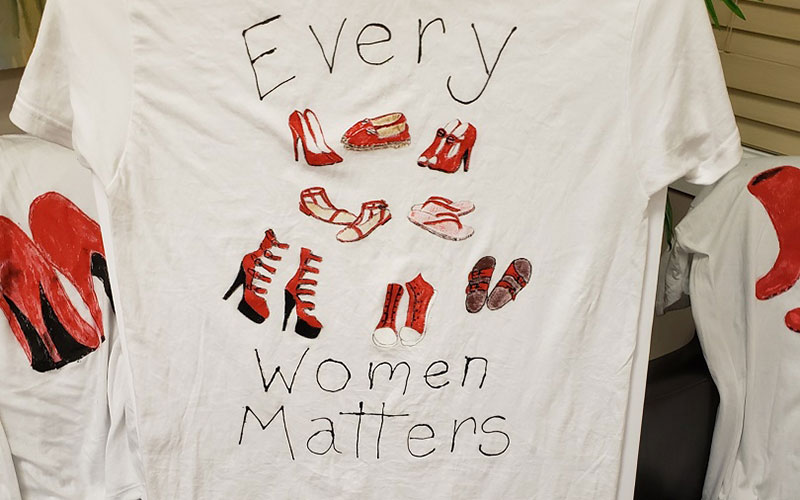 By: Alexander Cosh | First published in the Powell River Peak, May 6, 2021

Between 40 and 50 people registered to attend a walk through the Willingdon Beach trails in honour of missing and murdered Indigenous women, girls and two-spirited people on May 5, which marked the National Day of Awareness for Missing and Murdered Indigenous Women and Girls (MMIWG), also known as Red Dress Day.

The walk followed similar events held in June 2019, which took place after publication of the National Inquiry into Missing and Murdered Indigenous Women and Girls report. The report concluded that missing and murdered Indigenous women, girls and two-spirited people are victims of a larger genocide in Canada.

Cyndi Pallen, who helped coordinate the 2019 events, co-organized this year’s walk with Powell River and Region Transition House Society, Tla’amin Nation and hɛhɛwšin. Pallen said the walk was organized following a call out from Tsow-Tun Le Lum Society, a substance abuse and trauma treatment centre based on Vancouver Island.

“There are still a lot of people who are going missing, and for our people, First Nations people across the country and Canada, it’s been really challenging for their spirits,” said Pallen.  “I’d like to see it stopped. This is not something that’s normal for us to be doing. We shouldn’t be here, standing up and talking about all of the women who went missing and their families that are suffering.”

Pallen said an increasing number of residents in the qathet region are displaying red dresses to raise awareness about the issue.

To many First Nations, she explained, red is the only colour spirits can see.

“When we wear red, we are hoping to call back the missing spirits of the women and children so we can lay them to rest,” she added. “We’ve seen a lot of suffering, so it’s nice to have the community’s support here.”

This year’s walk was smaller than the 2019 events, with attendees starting at staggered times to allow for COVID-19 safety protocols. Red markers were placed to facilitate social distancing, and an RCMP officer was present to support observance of public health measures. Each participant was handed a cedar branch, which Pallen said would provide protection for the walkers.

The walk began on Laurel Street near Brooks Secondary School with a drumming circle and a recital of the Women’s Warrior Song, led by Pallen and Powell River Métis Nation members Tiana Nordstrom and Nadeen Sierpina.

In particular, Nordstrom would like to see more safe spaces provided for rehabilitation and family services, and believes the decriminalization of sex work could go a long way to protect Indigenous women who engage in such work.

“Sex work is work, and it is valid work,” said Nordstrom. “It needs to be protected, and it needs to be safe, and people need to realize there isn’t a stigma with it, and a large proportion of our women are being led into not just sex work, but sex trafficking.”

Nordstrom added that public pressure can lead to action, such as the federal and BC governments’ recently announced plans to fund complete cellular coverage along Highway 16 between Prince George and Prince Rupert.

The 700-kilometre road is commonly called the Highway of Tears because of the high number of Indigenous women and girls who have been murdered or gone missing along that route since the 1970s.

Jen Ramsay, who works with the Transition House Society as a peace counsellor, said events like Wednesday’s walk are key to building public awareness about such issues.

“From a local perspective it’s great to educate and build awareness with as many people as we can here, because I think so many people just don’t have a clue,” said Ramsay. “The statistics are really high and it has to stop.”

Messages for our programs are not picked up on weekends. Please see individual programs for their direct numbers.

© qathet Safety and Advocacy For Everyone (qathet SAFE). All rights reserved.  | Privacy Policy |  Site design by Maywood Design | Staff | Board